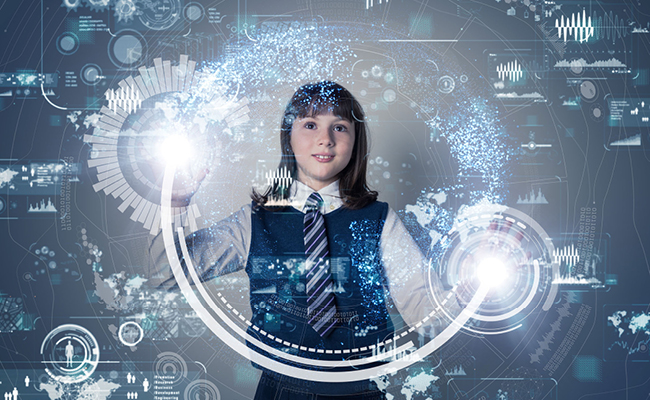 Mention artificial intelligence to the average person and you’re likely to conjure up fantastic images of science fiction shows like “Westworld” or movies like “The Matrix.” While those fictional depictions play well on screen, in reality, the technology that powers AI is doing its part today to drive everything from social media to architectural imaging.

Preparing young students for a world that increasingly relies on artificial intelligence is the goal of a team of interdisciplinary researchers at the University of Georgia and Arizona State University. Using a $1.5 million grant from the National Science Foundation, the researchers are working to craft a program that teaches middle school students how to put AI to work for them.

The project aims to create immersive experiences for middle school students, providing hands-on learning opportunities through a series of summer workshops and a dedicated fall curriculum. Students will use a program called ImageSTEM that relies on computational cameras to bring together various disciplines like math, design thinking and computer science.

“AI is going to be a disruptive technology, and we’re already seeing it in the shows we watch on Amazon or Netflix, and we experience it during our online shopping and the automation happening in the workplace,” said Ramana Pidaparti, a professor in the College of Engineering and the leader of UGA’s portion of the project. “It’s already making an impact in our daily lives, and now it’s going to be something we rely on even more, so getting these students exposed to this is important.”

The project includes a workforce development component since leveraging the possibilities of advanced technology such as AI will be integral to the tasks needed for a 21st century economy – particularly as society emerges from the COVID-19 quarantine. The researchers believe engaging students earlier in their academic journey with constructive and meaningful experiences with technology can better equip them to succeed in their education, job pursuits and careers.

But this isn’t a project that simply centers around computer science and math.

Pushing past the traditional boundaries of STEM (science, technology, engineering and math), Pidaparti and his colleagues plan to embrace a STEAM (science, technology, engineering, arts and math) approach that incorporates media arts into the curriculum. The experience centers around cultivating a learning environment that leverages creativity to better understand the principles behind the more science-focused disciplines.

For instance, one of the potential exercises students will perform involves using machine learning and AI to create artwork that can be used as a filter on Instagram.This task enables students to leverage the technology that powers AI to develop something creative and engaging.

The program also plans to prioritize underrepresented students. UGA’s project will focus on exposing AfricanAmerican students from a rural region in Georgia to various AI technologies, while the Arizona State programming will bring in Hispanic and Latino middle schoolers.

“We need to make sure that underrepresented populations are exposed to the ideas coming from AI,” said Pidaparti. “We know there are socioeconomic factors at play and, sometimes, a lack of access to technology that can serve as a gap. Currently that gap is really wide, and we want to make sure we close that gap to some extent.”

Pidaparti envisions the teachers participating in the research project being collaborators during the process, enabling them to co-create a curriculum that can help level the playing field for underserved students. By relying on iPhones and open-source software options, the cost to any participants will be minimal to non-existent, while also better equipping them with the technological know-how needed to compete in a rapidly advancing global economy.

In addition to Pidaparti, UGA’s team includes John Mativo, an associate professor in the Mary Frances Early College of Education, and Dawn Robinson, a professor in the department of sociology.

“Some of the professional societies already are thinking along the lines of ‘what is the future of AI in education at different grade levels,’ and they’re discussing starting it at earlier levels like elementary school,” Pidaparti said. “This project focuses on middle school, and we are focusing our efforts on teaching them how to use the computational camera, which is pretty similar to the iPhone and other cameras on the market. This means they already have a grasp on some of the tools we’re going to use and some of the things we’re trying to do.”